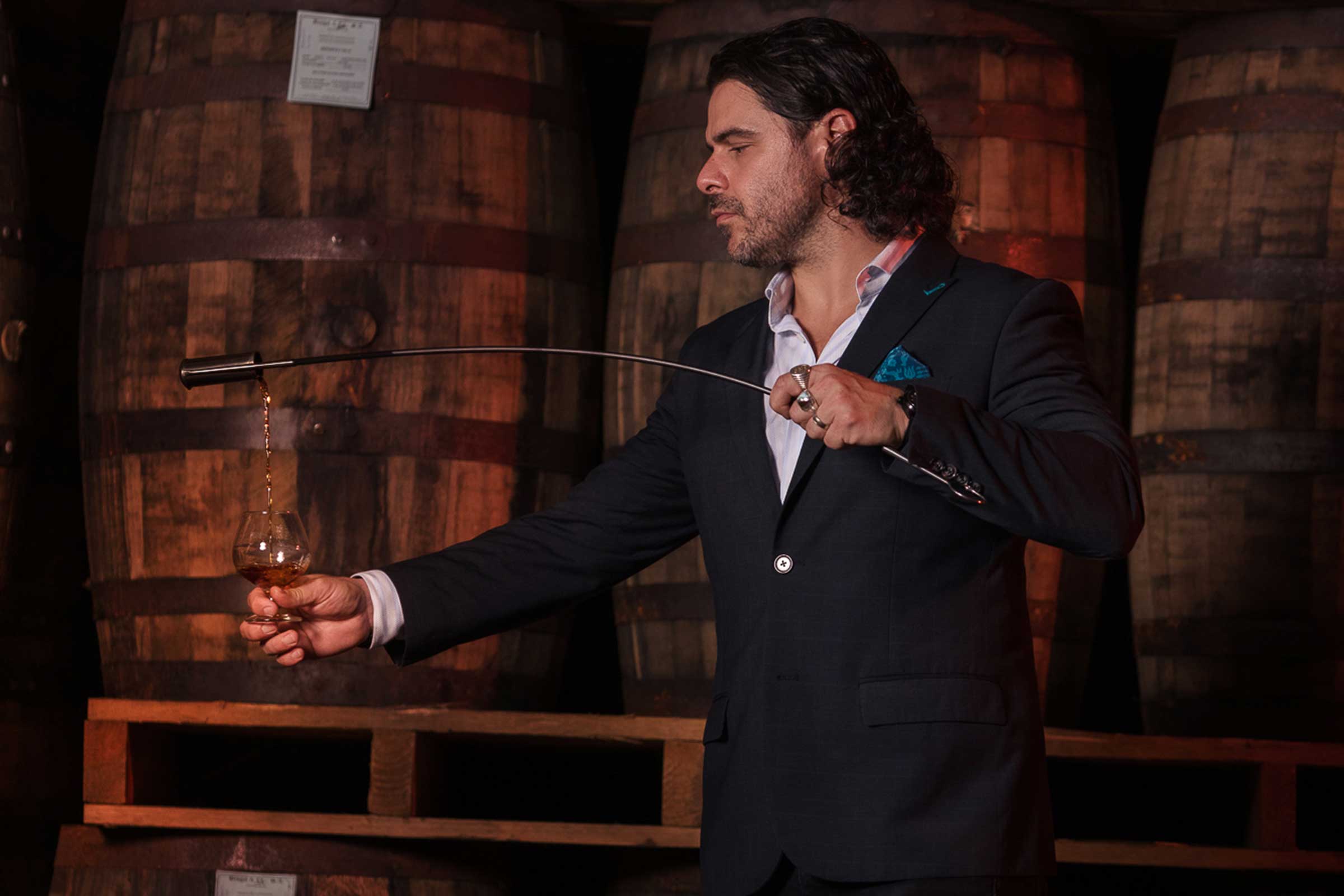 Gabriel Urrutia’s irrepressible energy, passion and enthusiasm is inspiring, so it’s no surprise that he makes connections and forges friendships wherever he travels. His unconventional approach to work, formidable drive and natural charisma has enabled him to travel the globe as a consultant for several high-profile alcohol brands, author a bestselling book, achieve his MBA, and become a professor at Florida International University, one of the most prestigious hospitality schools in the world.

He also featured in America’s Top 40 Under 40 Tastemakers, which celebrates the top experts and connoisseurs in the wine and spirits industry, and he achieved all this whilst raising a young family, whose unconditional love and support he credits as being key to his success.

Born in Miami, to a Cuban mother and a father who originated from Chile, he takes great pride in his dual heritage, and describes his upbringing as being a wonderful “synergy of culture, food and Latin hospitality”. Both his parents have a strong work ethic, and although Gabriel is determined to be an individual and follow his own path, a pride in his work and determination to succeed are characteristics that he’s undoubtedly inherited.

He’s also a great believer in giving back to the local community through charitable donations and is involved in several philanthropic efforts: “That is something I hold dear to my heart, whether it be preserving Miami’s history through the local museum, or getting involved with local charitable and educational initiatives, I want to give back and use my skills and experience to help make the city a better place to live.”

A Unique Blend of Culture

Gabriel grew up in Miami, which he describes as being a “melting pot of cultures” and unlike any other place in America. A broadly Spanish-speaking city due to its large Latin population, it boasts some of the “best bars in the world,” and it is this unique blend of culture that inspires Gabriel in his work.

In fact, his bestselling book ‘Miami’s Cocktails’ could provide no greater testament to both the pride he takes in his city and his extensive knowledge of it, from the exclusive venues to the local people, and the Latin culture that both defines and unites them. “I wanted to create a compendium of cocktails, but more than that, I wanted to show people all the extraordinary things that Miami is capable of.”

Gabriel had never written a book before, but he knew that Miami was a city like no other and had a thousand stories to tell, so he decided to contact the biggest publisher in the USA and pitch his idea. His unwavering belief in the city that helped raise him proved not to be misplaced because ‘Miami’s cocktails’ went on to become a bestseller, receiving a 2020 nomination from the Tales of the Cocktail Spirited Awards, the “Oscars of the hospitality industry.”

He brings over 20 years’ experience to his role as Brugal ambassador, having worked in such diverse fields as marketing, distributing and consultancy for several internationally recognized alcohol brands, where he gained a wealth of experience in event planning and other commercial aspects of the business. He was also regional director of a prestigious winery in California, where he managed 13 states for the company. And so, as a rum connoisseur who considers Brugal his favorite spirit, he views it as both an honor and a privilege to work for the brand. “Innovation and individuality are the main driving forces in my career, and my role as Brugal ambassador allows me to flex my creative muscles, create programs, take risks, and achieve the extraordinary.”

However, for Gabriel, the most surprising thing about the brand is the work culture. With his vast and varied experience of the hospitality industry, he knows that the family-focused work culture at Brugal is truly unique. “The company is so well-established, but at the same time, when visiting Brugal’s distillery in Puerto Plata, you discover there is a level of transparency, openness and connection that belies the fact that the brand has a 130-year history.”

Gabriel describes the hospitality industry as being akin to his “religion,” which is why it’s unlikely that you’ll find anyone better suited to share the story of Brugal and the incredible aged rums that the five generations of rum masters have created. You can sense Gabriel’s passion in the way he approaches his work, every word that he writes, and the way he engages with each person that he meets. And it’s very clear within minutes of meeting him that his unique skill set and uplifting personality enables him to excel at connecting people and celebrating what brings us together — a sense of unity that perfectly epitomizes much of what Brugal represents.

Creating Opportunities for the Next Generation

In his previous roles, he has conducted 250 training sessions for bartenders, while drawing on his insights, creativity and knowledge to develop over 100 fresh and exciting cocktail menus. And it is this experience that allows him to excel in his role as Brugal ambassador, creating pairing menus, organizing events and dinners, educating people about the craft of rum-making, and helping to contribute to the Brugal legacy.

He thrives when he’s out in Miami, engaging people with Brugal’s story, sharing his almost encyclopedic knowledge of both the city and the brand, and offering people a whole new perspective on the drinking experience, all in Gabe’s own inimitable style.

Spiced rums are having such a moment and have had a huge rise in popularity. Why do you think that is?

Spiced rums are a great way to explore the rum category and begin the journey of understanding rum. Of course, spiced rum has added flavors to enhance that spice that you would regularly find in a barrel because of aging. At Brugal, we pride ourselves in getting the majority of our flavor straight from the barrel. There is over 130 years of rum-making history at Brugal and we’re proud to share this story and rum with the world.

What is your favorite way to enjoy Brugal Rum? How should it be utilized?

My favorite way to enjoy Brugal 1888 Rum is on the rocks or in an elegant cocktail. I have been sipping on a Palmetto quite a bit which is a classic cocktail that takes on Brugal 1888 Rum, Sweet Vermouth, and Orange Bitters. It’s perfect!

What are the flavor profiles of Brugal?

Brugal 1888 Rum takes the majority of its flavor from casks. The American Oak brings spice, cinnamon, coffee and chocolate notes, while the first-fill Oloroso Sherry brings red fruits and dried fruits, I get dried fruits much like those beautiful sherries from Jerez.

Is there a special way to note how it is made?

What makes Brugal 1888 Rum so special is the double again process. When sitting in the Caribbean, that heat and humidity provide an environment to rapidly age the spirit. With use this to our advantage, but first aging in first-fill American Bourbon barrel for 5-7 years then utilize a first-fill Oloroso Sherry barrel for 5-7 years. We average approximately 12 years in barrel for a rum that can be drank neat, on the rocks, or in an elegant cocktail.

For me three things that define a great rum our quality of ingredients, rum-making expertise and the quality of barrels. We work with two different sugar producers to source our molasses for a true farm-to-table approach. Our rum-maker or Maestra Ronera is Jassil Villanueva. She is the first female rum make in the over 130 year history of Brugal and is direct lineage to Don Andres Brugal, the founder of Brugal in1888. Our barrels are sourced direct from specific Bourbon brands while our first-fill Oloroso Sherry barrels are from Jerez. We are involved in every part of the process to create an exceptional rum.

Discover the flavors of Brugal Rum as it partners with Joia Beach for its 2022 Halloween Celebration. Featuring Brugal specialty cocktails, miami’s ultimate hidden oasis invites guests to discover the lost island at joia beach this halloween. party like pirates and get lost at sea for the week’s most exciting halloween celebration. in conjunction with the house of brugal rum, halloween week festivities will abound at joia beach all week long, culminating on the 30th with music by moojo, live entertainment and a host of surprises. get ready to dance, drink, and celebrate at miami’s best halloween party. 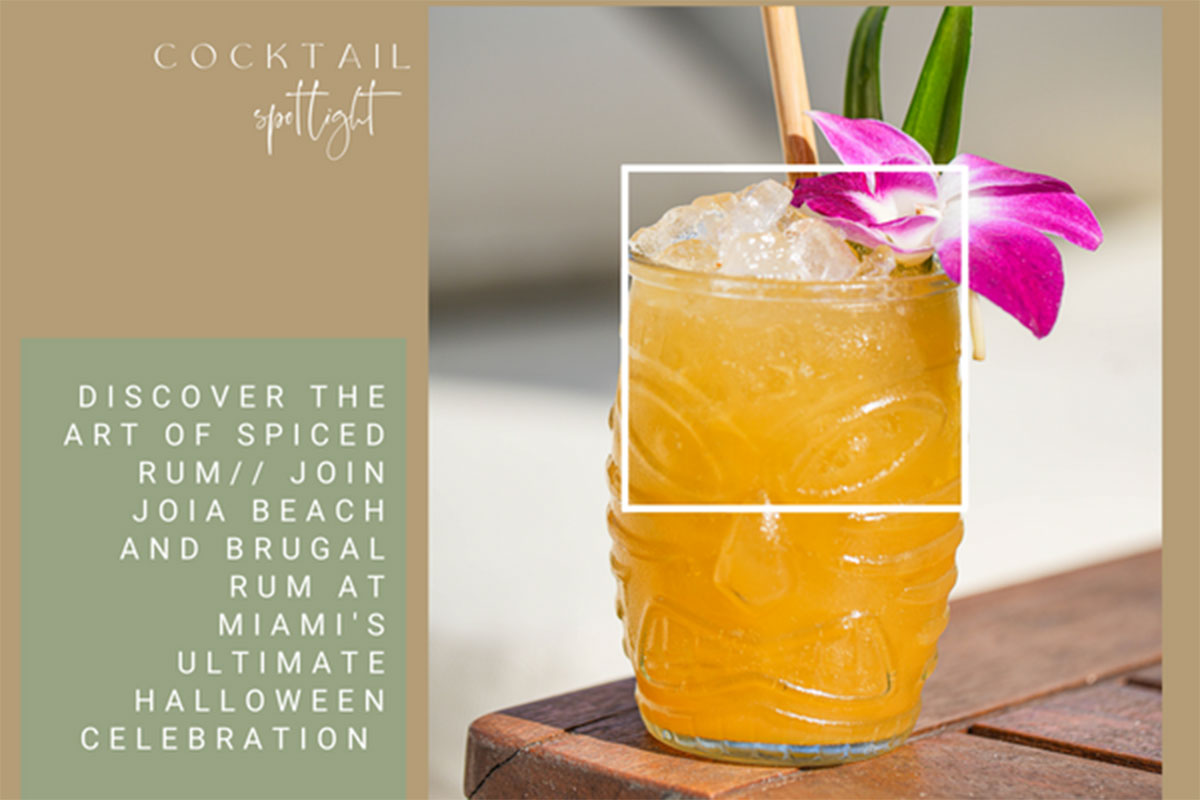 Cocktail Spotlight | Recipes
This spicy, savory concoction is perfect for those who enjoy their cocktails with a little kick. Spicy, smoky, and deliciously bold, the cactus cocktail is a great alternative to the classic margarita.